You’ve got an API, it’s secured by OAuth using the Client Credentials flow (typically used for server to server communication), and now you want to enable the consumers of your API to try it out in an authenticated way, directly from Swagger. This post is about an API that uses Client Credentials, but it could also be used as a starting point if you want to do the same, but perhaps authenticating end users with the OIDC Authorization code PKCE flow.

This means that you probably have a call to .AddSwaggerGen(...) in your ConfigureServices method in Startup.cs. let’s see what changes we need to do to get our desired end result.

After we’ve done this, then we will find that the following has been added to our swagger.json:

And that you’ve got a pretty green button with the text “Authorize” near the top of the page when you access /swagger/index.html, which displays the following when triggered, and allows you to authenticate using Client Credentials. If you’re using Identity server demo to try this out, then you may use the client_id: m2m and client_secret: secret, if this doesn’t work, then check on Identity server demo if they’ve changed the credentials for the Client Credentials flow client. 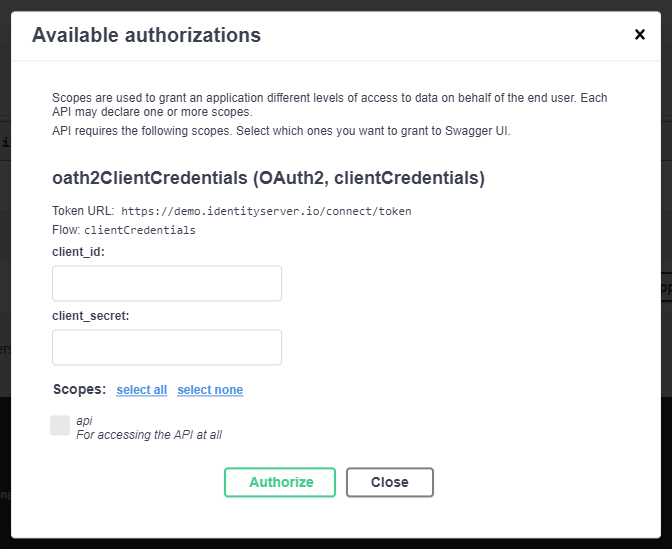 Resources used when finding this solution